How to Staking Cardano (ADA)
A step by step guide

Are you ready to stake cardano?

Cardano is a proof of stake (PoS) blockchain. This means that even if you do not have the time or resources to run a stake pool, you can still delegate your ada to another pool operator and have it staked on your behalf.

To maximize rewards earned you want to choose a pool with low fees. There are two components to a pool’s fee: Variable fee and Fixed fee, We are committed to keeping the fee as low as possible, from 0% to 1% variable fee and the fixed fee of the Cardano system is 340₳ per epoch.

Staking is a process where ADA holders delegate their ADA to a staking pool. It enables ADA holders who do not have the skills or desire to run a full node to be part of the network and be rewarded proportionally based on the amount of staking that is delegated.

There is NO security risk for the user as you are not sending any funds to our pool, just delegating your account.

How to stake from Yoroi wallet?

2. Choose your preferred browser option after clicking the download button.

3. After adding it to your browser, launch the Yoroi Wallet extension within the browser.

5. Make sure you have ADA in your wallet. You may fund your wallet by creating an address in the "Receive" tab.

You may now go to the "Dashboard" tab to track your rewards. How to stake from Daedalus wallet?

2. The first time launching the wallet, you will need to wait for Daedalus to sync with the blockchain.

3. After Daedalus finished syncing, simply follow the instructions to create / restore your wallet.

4. Make sure you have ADA in your wallet. You may fund your wallet by creating an address in the "Receive" tab.

5. Click the second button in the left panel and select the "Stake Pools" tab.

6. Search for "VADA" and click the "Delegate to this pool" button.

You may now go to the "Rewards" tab to track your rewards. How to stake from Yoroi Wallet on Mobile?

1. Go and download the Yoroi Wallet for your device: Android or iOS

2. Launch the app and follow the instructions to connect / create / restore your Cardano wallet.

3. Once set up, You may fund your wallet by creating an address in the "Receive" tab.

4. Go to the "Dashboard" tab and click "Go to Staking Center".

You may now go back to the "Dashboard" tab to track your rewards. How to stake from AdaLite Wallet?

ADALite is a wallet with hardware wallet support for select Trezor and Ledger devices.

1. Go to http://adalite.io and choose your preferred way of login.

2. Launch the Cardano app on your hardware wallet and perform the required key presses to unlock your AdaLite wallet. The Export public key prompt will be displayed twice and to be confirmed and accepted on both occasions.

3. Go to the Staking tab shown at the top.

4. In the right side of the screen, search for the pool you want to delegate.

6. Select Delegate and confirm on your device. 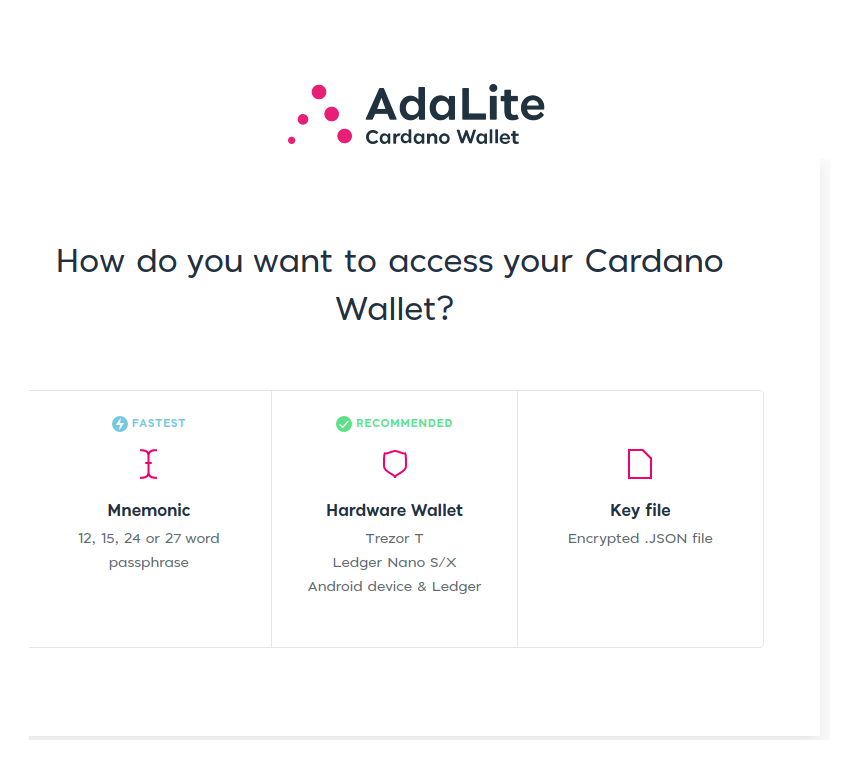 The reward process is distributed
after the delegate is done

Each epoch is 5 days, the reward will be distributed every five days.

Note: If you are an delegate for the first time, you can wait 18 to 20 days for the reward to be distributed to your wallet.

We are here to support Cardano Staking

1What is Cardano delegation?

Cardano delegation is the method by which individual coin holders can delegate their ADA to staking pools and earn Cardano rewards based on the size and performance metrics of those pools.

Essentially, delegation is how the everyman “mines” Cardano (though this is technically done by the pools that earn slot leader status in each five-day epoch).

2What is Proof of Stake?

In proof of work, miners invest computing power to compete to be chosen as the leader who gets to make the next block and win a reward for doing so. By contrast, in proof of stake, the stakeholder who will form the next block is randomly selected, proportionally to the size of the stake that they have, according to the blockchain ledger.

“Proof” means having evidence that blocks of transactions are legitimate. “Stake” means the relative value held by addresses on the node. “Relative value” is all the value held by wallets on a particular node divided by total value in the system.

There have been a number of attempts by other cryptocurrencies to develop a proof of stake algorithm, although these protocols have suffered from flaws and have not been shown to be provably secure.

For a blockchain to be secure, the means of selecting a stakeholder to make a block must be truly random. An innovation of Ouroboros to produce the randomness for the leader election process is to do this by way of a secure, multiparty implementation of a coin-flipping protocol.

3Do I need to send you ADA in order to delegate my stake?
No. We never have any access to your coins. In absolutely no circumstances should you ever send your ADA to anyone who claims to be running a staking pool. Delegating your stake to any pool does not require you to send your ADA. ADA will never leave your wallet. All delegation will occur within the Daedalus and Yoroi Wallets. You are always in control of your coins.
4Is my ADA locked or frozen for a certain amount of time?
No. Your ADA will not be locked or frozen for a certain time-period when delegated. You are free to move your ADA in and out of your delegated stake and free to change which staking pools you participate in as often as you want. The act of delegation does not relinquish spending power. Only the right to participate in the protocol is delegated. Funds can be spent normally at any time.
5What is a Cardano epoch?

Cardano’s Ouroboros protocol divides up its delegation staking rewards across five-day periods called epochs. These epochs are the periods during which different stake pools compete with one another to earn slot leader designation, which lets them create and validate new blocks.

ADA rewards are disbursed after every epoch.

6Are there Cardano transaction fees when staking to a pool?

Yes. When you delegate your ADA to a stake pool, you will pay a nominal transaction fee (the equivalent of a few cents in US dollars).

The very first time you delegate your stake you will also pay a 2 ADA deposit which is returned to you when you undelegate your funds.

7How often will I get staking rewards for ADA?
When staking Cardano, rewards will be disbursed after every epoch, or every five days. Over the long run, the current model indicates that those who participate in ADA staking will earn a return of about 5.1% on their investment annually.